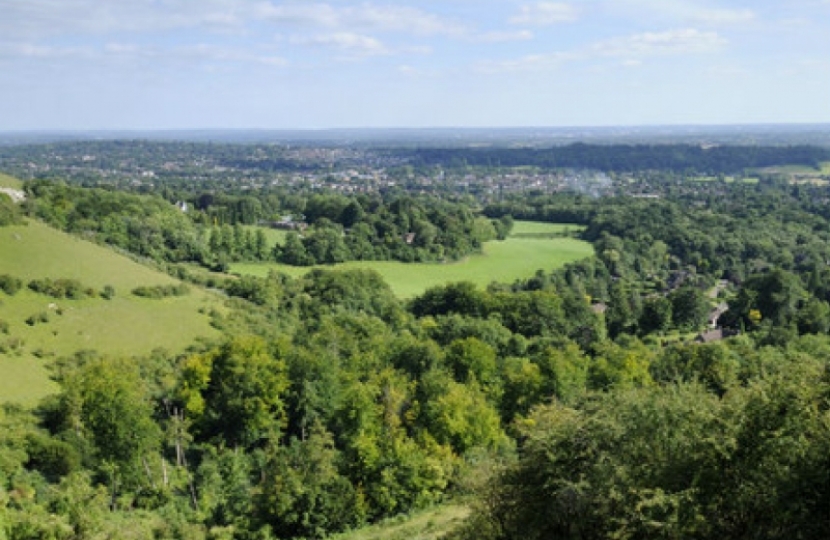 As the Mole Valley MP with a number of Guildford Wards in my Constituency I must acknowledge the great effort made by many thousands of Guildford Borough residents in contacting the Council and objecting to the latest draft of the Local Plan. This diligence on the part of people determined to protect the unique environment in which they live and work is heartening and encouraging to me as someone who has long campaigned on and fought for Green Belt protection. The proportion of protected land in these wards is of considerable significance.

I will not be addressing in great detail those many individual sites and proposals contained within the draft Local Plan which are highly contentious. I have read many submissions from constituents which do this perfectly effectively and I endorse and agree with these objections. The accumulation of these objections produces a picture in which residents of the Mole Valley Wards of Guildford Borough are united in opposition to what is proposed in the draft Local Plan – if any resident has written in support of the current draft I am not aware of this! I submit that a Plan which has drawn such an utterly negative response, even compared to the much reviled 2014 draft, cannot be legitimate and must be withdrawn and reworked.

A reworked Plan would not simply be a matter of slightly altering some boundaries or numbers – at this stage it must constitute a wholesale realignment of thinking and direction of travel on the part of Guildford Borough Council. Central to this would be the Council acknowledging that the present figures for predicted future housing need, around which

much of this Local Plan hinges, are currently too high and in light of the particular situation in Guildford Borough (the prevalence of Green Belt land) they must fight as hard as is needed to have these numbers brought down. In this they would have my full support and that of the huge majority of concerned residents.

After the housing numbers have been revised downwards, the entire approach to planning in Guildford Borough ought also to shift. I have in the past publically called for a planning strategy which focuses more on higher rise development in the centre of Guildford itself. In doing so the historic very central portion of Guildford must be respected. Such developments have a number of advantages, they constitute a far more effective use of land than new builds in rural Green Belt, they are far more likely to be well linked to existing infrastructure, they will be more energy efficient and perhaps most importantly I believe that such development would also be more in line with what future Guildford residents would be looking for in a place to live as opposed to smaller clusters of houses out in the Green Belt, further away from Guildford’s amenities and rail links.

The position of central government with regard to local planning and development on the Green Belt is clear. Residents have heard in the past comments to the effect of ‘it is the government in Westminster which is forcing us to do this…’ This was not true then and it is not true now. I have met with Ministerial colleagues on multiple occasions and corresponded with the Department for Communities and Local Government at length on the questions of Local Planning and Green Belt policy. The Conservative Government is absolutely committed to Green Belt protection, I would urge the leadership and planners at Guildford Borough Council to closely study both the National Planning Policy Framework (NPPF) and the various Ministerial statements published on this topic. The only message one could draw from these needs re-emphasising. There is nothing in national policy which supports, encourages or condones any development on the Green Belt save for the most exceptional – and housing need is acknowledged as not falling into this category.

In addition to the Green Belt issue, I do not believe it is appropriate to propose developments in the green belt, dependent upon large and expensive road infra structural developments. With the present economic outlook, especially with Brexit looming ahead these are most unlikely to be fulfilled.  Whether we take the ill-conceived plans for thousands of houses at Gosden Farm in West Clandon, at Wisley or Garlick Arch there is a clear lack of foresight where the reliance on such suggested infrastructure will produce planning blight on surrounding areas. This statement is true in the context of not only roads but sewerage or local services such as hospitals and school places.

The approach to the plan should be to proceed on the acceptance that it has proved possible to persuade the Government Inspectors and hence the Government that because of the protections on such a huge proportion of Guildford Borough a lower target of housing numbers is acceptable. I personally believe and hope that the new leadership of GBC is more open, more receptive to new ideas and more creative than that which came before and that it is within the capacity of the council to craft a genuinely successful plan – but only if lessons are learnt and a genuine acceptance of the need for a change of direction guides council thinking from this point onwards.

Member of Parliament for Mole Valley